Sometimes, you go to see a film that is so in touch with the moment of its inception that the period it is set in bears almost no significance to the work at hand.  'Joker' is one such film.  It's funny that a film spinning out of the DC universe could have more to say about the human condition, current politics and mental health than most of the films released this year.  Like it or not, 'Joker' is the equivalent of a lit match.

I saw the film yesterday and it is still resonating today.  Historically, the film can not be seen in isolation as many of the reviewers seem to be picking up on.  There are links with 'The King of Comedy', 'Taxi Driver' and 'Falling Down'.  Also and perhaps most tellingly, 'Fight Club' and 'American Psycho'.  The sense of nihilism that pervades 'Joker' is no different to that which underpins the above works.

The film at its simplest provides the story of a man called Arthur Fleck who could be you or I trying to get by on a daily basis.  His mental or neurological condition is never accurately developed or explained.  We are shown various sequences, which may hint at various aspects of his illness including a scene in which he hands the angry mother of a child who he has entertained with the peek a boo game a card explaining that his recurrent laughter is a symptom of his condition.  She looks in dismay at the card.  Also his therapy sessions, which seem to be being conducted within a social services environment indicate severe depression amongst other things.  The fact that he is taking several types of medication help to reiterate that mental illness tortures the character but again, the film is not intended as a comprehensive examination of the specifics of his illness.  You will empathise or not with the character depending upon your understanding of him as a human being suffering.  He is vulnerable, confused and learning new information every day, some of which could be false or partial.

One of my favourite sequences involves a news broadcast involving 'Super rats' and someone's passing comment about needing super cats to solve the problem.  The media in this film is represented as the purveyor of packaged entertainment and information.  It's sensationalist, simplistic and oddly enough, no different from the fare we are regularly receiving today.  Arthur and his mother spend a lot of time watching Murray Franklin and his talk show.  In many respects, Murray Franklin is a substitute father figure for Arthur, an aspirational role model.  Someone who has succeeded in the world of entertainment with his gentle comedy and personable, laid back style of interviewing.  The subsequent fate of Murray Franklin seems logical within the dynamic of the film.  The important question to ask yourself is how do you feel when it happens?

The truly disturbing aspect of this film is not the fact that it asks us to consider gun crime and ownership (which it does) but that it draws attention to how disaffected we all are at the moment.  With the exception of a handful of murders, Arthur Fleck does very little but suffer throughout the film.  His murders can't be condoned but tragically, his illness, personal circumstances and societal problems have led him to become the man he is.  In the UK, the increase in youth crime, homelessness and the constant inertial attached to the so-called 'Brexit' negotiations etc indicate a society on the edge.  The US is going through its own problems.  When societal ills reach a crescendo, you see the rise of fascism or fundamentalism in its myriad forms.  There is a scene in which Arthur throws a clown mask in the bin and that symbolises an important moment in the film.  He really doesn't matter any more.  In his own head, he never did yet somehow, the sense of futility and desperation has spawned something else.  When all else fails, follow the most vocal or charismatic.  Indeed as the therapist asks Arthur towards the end of the film, 'What's the punchline?'  There really is no answer.

I can imagine many people's criticisms of the film will revolve around their perceived belief as to what the Joker means to them.  For some, he is the clown popularised in the Silver Age and indeed, in the 60s Batman TV series, which starred Cesar Romero as the Joker.  But for others, 'The Killing Joke' and 'The Dark Knight Returns' Joker rings more true.  The Joker since the 80s has been most regularly depicted as a psychopath, utterly unpredictable and in many respects, the mirror image of Batman.  Only difference between the two characters being either the leaning towards the moral absolutes of either good or evil.  There are variations on the characters but fundamentally, Batman would be a safer ally (most of the time).  Until Joaquin Phoenix's depiction of the Joker, the most accurate representation of the post 80s Joker in film or TV was provided by Heath Ledger in 'The Dark Knight'.  The sheer insanity of his portrayal still haunts me.

An interesting aside that you can ask yourself concerning the film is why it is called 'Joker' and not 'The Joker'.  What do we gain by losing the definite article?  I feel you gain the sense of universality and Everyman vibe that the film offers.  The only things stopping the application of greasepaint, a mask or indeed, a new sense of identity are purpose and motivation.  What stops you from becoming a hero or a monster?  What stops you from standing up for what you believe in?

As a concluding remark, it is significant that one of the images that Warner Brothers is using to promote the film depicts Arthur Fleck with the greasepaint styled in a similar manner to the US flag melting from his face.  A more subversive image you couldn't hope to encounter.  Ironically, it's the image that is being used on the back of this month's DC comics.  The one thing I haven't really discussed in detail is how the film is at its essence a critique of the capitalist system and as such I can imagine many a Marxist rubbing their hands.  But see the film yourself and make up your own mind. 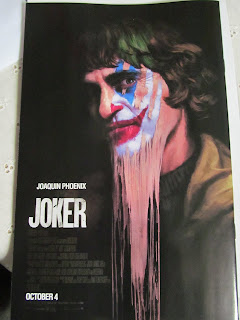 'The King of Comedy' is about a desperate comedian who goes a bit too far with his hero worship.  The film was released in 1983 and is widely available.  It was directed by Martin Scorsese and starred Robert De Niro.

'Taxi Driver' is about a war veteran who works as a taxi driver who gradually descends into insanity.  The film was released in 1976 and is widely available.  It was directed by Martin Scorsese and starred Robert De Niro.

'Falling Down' is about an unemployed man who is having a very bad time.  Michael Douglas portrays the character in question and the film was directed by Joel Schumacher in 1993.  It's a film that is also widely available and still disturbs.

'Fight Club' started out as a novel by Chuck Palahniuk before becoming a film.  Both the novel and film explore aspects of alienation and frustration.  The film was directed by David Fincher and like the novel is widely available:

'American Psycho' was originally a novel by Bret Easton Ellis published in 1991.  The main character, Patrick Bateman may or may not be experiencing the events of the novel in the same way as the reader.  In many respects, this may also be true of Arthur Fleck in 'Joker'.  The film was released in 2000 and was directed by Mary Harron.  Again, widely available:

'Batman: The Killing Joke' may be the definitive Joker story.  It was written by Alan Moore and the art was provided by Brian Bolland.  It was released in 1988 as a one shot prestige format (I remember buying it then) by DC Comics.  It provides one possible origin story for the Joker.  It is significant to remember that the DC has multiple versions of the Joker running around, largely accredited to their various Multiverses and the notion of there being more than one Earth.  But that's too complicated to go into in this blog:

'Batman: The Dark Knight Returns' could very well be the definitive Batman story.  The fate of the Joker at the hands of Batman in this series seems inevitable.  The series was originally released in four parts in 1986 and was written and pencilled by Frank Miller.  It was inked by Klaus Janson and coloured by Lynn Varley.  DC published this series and to say it was influential would be an understatement:

Adam West starred as Batman in the 60s 'Batman' TV series.  Cesar Romero played the Joker.  Oddly enough, his Joker was not dissimilar to representations of the Riddler (leaving clues etc).  It's available on DVD and Blu Ray:

'The Dark Knight' was the second in the 'Dark Knight' film trilogy and Heath Ledger's portrayal of the Joker is the raw material of nightmares.  It was directed by Christopher Nolan and starred Christian Bale as Batman.  The film is widely available:

(All of the above books/comics/TV series and films are copyright to their respective owners).

'Joker' is currently out in the cinema and this blog simply touches on aspects of the film.  All references to character and plot and the use of the promotional image are used for illustrative purposes only.  The copyright remains with DC and Warner Brothers: