This was a pretty disturbing play based on Strindberg's play.  A couple minding their own business are encroached upon by a third individual who tears their relationship to pieces.  This play had interesting points to raise concerning art and mental illness.  Once again, a curious choice of play for a fringe theatre but it was worth trying.  The artistic decision to set the play during a period of revolutionary upheaval also added to the atmosphere of the piece.

Ridley Scott's rather poor adaptation of 'Do Androids Dream of Electric Sheep?', but in its own right, it's a pretty unique and beautiful film.  The Philip K.Dick original explores the environmental issues he foresaw for the future i.e. extinct animals and the market that comes into being selling electronic versions of them.  The film does touch on the subject slightly but it is never openly spoken about.  I vaguely remember electronic animals and birds being visible at certain points.  It is still a fascinating film.  The empathy that you begin to feel for the Replicants as the film progresses is strange.  They are like kids, whereas the adult human characters are all jaded and bitter.  Harrison Ford's character could very well be human but I seriously doubt that fact.

Saturday 4th April  2015 - 'Wapplington/McQueen' and 'Salt and Silver' at the Tate Britain.

Yes, I attended two exhibitions on this occasion.  The 'Wapplington/McQueen' exhibition was great and provided much needed background information for the 'McQueen' exhibition at the V and A.  In many respects, I far preferred this photographic exhibition as it documented the creation and exhibition of one of Alexander McQueen's shows.  As such, you got to see him at work, creating lists of interests which he used to inform his design work.  The 'Salt and Silver' exhibition was focused on early photography from 1840 to 1860.  Literally, photos printed on salted paper.  Lots of images of portraits, landscapes and architecture.  Sepia tinged insights into another world.

A surprisingly touching play by Robert Holman.  Two young men discuss their 'father' and his upcoming funeral.  This packed a powerful emotional punch for me, four months after my Dad's death.  Well acted and this continued to resonate for some time after I saw it.

Kevin Spacey's swansong at the Old Vic.  He had already performed this play before at the Old Vic, which I missed, so hence why I rushed to get tickets for the play the second time round.  Kevin Spacey was superb as the lawyer.  As an actor, he has a presence on stage that holds your attention whatever he does.  He seemed genuinely moved when the audience gave him a well deserved standing ovation at the end of the performance.  A one man show that you really needed to see.

This cheated somewhat.  The acts were spotlit to show them their way onto the stage then the lights were turned out for the majority of their acts then just before the end they were fully spotlit.  As one of the comedians said, the advantage of this approach to comedy is the fact that you can deliver your dodgiest material and no-one can see you!  I remember there being about three or four acts.  The upside down purple cow is still the most beautiful of venues.

I saw this play with a friend and we were both a little underwhelmed, although it wasn't bad. Basically, it's a Faustian tale of a manipulative agent dictating the decisions of an up and coming comedian called Steve and his girlfriend trying to foil the antics of the agent.  Interesting theatrical device involving repeating the comedian's material in different venues and the gradual watering down of the material.  As I say, not brilliant but if it comes around again, it may be worth seeing.  The play was written by Owen McCafferty.

This screening was preceded by a short Q and A with the writer, Jon Ronson via Skype.  He appeared to be in a study somewhere.  I think he quickly got the sense that the audience was not full.  This was the first time I had seen this film in its entirety.  Previously, I had seen bits of it but not the whole film.  It's a definite classic.  I blogged about it, so I won't talk too much about it here except to note that the relationships depicted in the film are none too healthy, which makes for fascinating viewing.

Utterly crazy adaptation of Shakespeare's play performed in Russian with English surtitles.  I remember revolving cubes and quite a complicated play that I could follow thanks to the performers (plus some of the surtitles).

Brilliant revival of the musical starring Imelda Staunton.  I attended this musical with my Mum and Imelda Staunton was incredible.  She deservedly received amazing reviews for her performance. Lara Pulver also dazzled as her daughter, Louise.  A show where the female roles are far stronger and more vital than the male ones.

Nicely staged production based on the life of J. Robert Oppenheimer, American theoretical physicist and one of the contributors to the Manhattan Project.  I attended this production with a friend and I have fond memories of the chalked equations on the stage, both on blackboards and on the stage itself.

This strange little film was followed up by a Q and A with the director Carol Morley.  It's set in 1969 and documents an outbreak of fainting spells in an English Girls' School.  Intriguingly, according to the director, her film was inspired by various actual outbreaks of mass psychogenic illness.  I found this film interesting, although reviews were very varied.  It's a unique film and it won't be to everyone's taste.

Basically, just arrived a day early (I went to see a play the following day) to visit Anne Hathaway's Cottage, where I helped to pick up a lady who had fallen over.  I only mention this fact as it's odd how random details suddenly spring to mind when recalling events.  I also enjoyed the sculptures in the gardens of Anne Hathaway's Cottage.

Saturday 25th April 2015 - 'Death of A Salesman' at the Courtyard Theatre, Stratford-Upon-Avon.

Arthur Miller's brilliant play about an ageing salesman who gradually loses the will to live, owing to the pressures of work and his family life.  Antony Sher was brilliant as Willy Loman.  I attended this production with a friend and I was happy to finally see a play in Stratford-Upon-Avon.  Also I got to see the celebrations for the anniversary of Shakespeare's birthday, prior to going to the theatre.  There was music, a march and so many other things going on.

This was an absolutely hilarious one woman show performed by Olivia Poulet.  It's a play by Mark Ravenhill and Olivia Poulet's character is an agent, the audience are effectively the actor that she is trying to sell a screenplay too.  The screenplay is a morally dodgy affair involving a relationship between a terrorist and the woman who grows to love him.  The Arcola Theatre remains one of my favourite theatres.  It certainly stages a very eclectic range of plays and performances.

This play was written by Sam H. Freeman and explores gender violence and an unwanted Facebook posting.  Powerfully acted by four actresses who each play the main protagonist of Scarlet at different points.  The audience were seated around the performers and the play had a punchy, urgent quality about it.

An absolutely delightful adaptation of Shakespeare's play produced by the Smooth Faced Gentlemen theatre company.  The all female cast used paint to visually depict the horrors being committed throughout this play, which is surely one of Shakespeare's nastiest.  You will never look at pies in the same way again after seeing any version of this play. 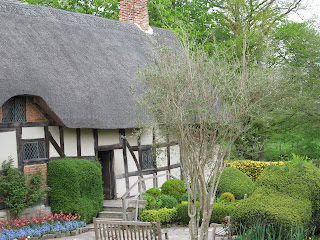 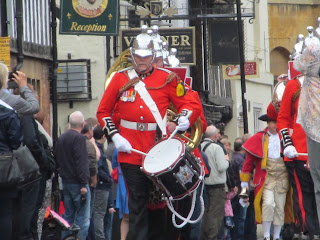 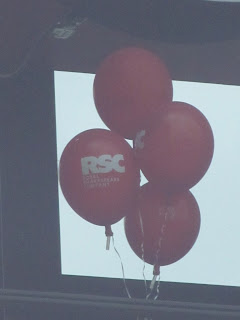 Balloons near the Courtyard Theatre.

All plays, exhibitions and places of interest are copyright to their respective owners.