The second stage of my little hunt for Book Benches commenced on the morning of 3rd August 2014.  I decided to explore the Greenwich Trail.  My hunt ended up taking a couple of hours and I couldn't find three of the benches in Greenwich Park.  I vowed to find them at a later date as there is only so much fun to be gained in walking round in circles.  As I discovered from my previous hunt for benches, some of the benches were located in quite odd locations that did involve walking down random side streets.  Fortunately, the uniformity of the basic bench design made them slightly easier to locate, providing there weren't groups of people congregating around them as though they were sacred relics. 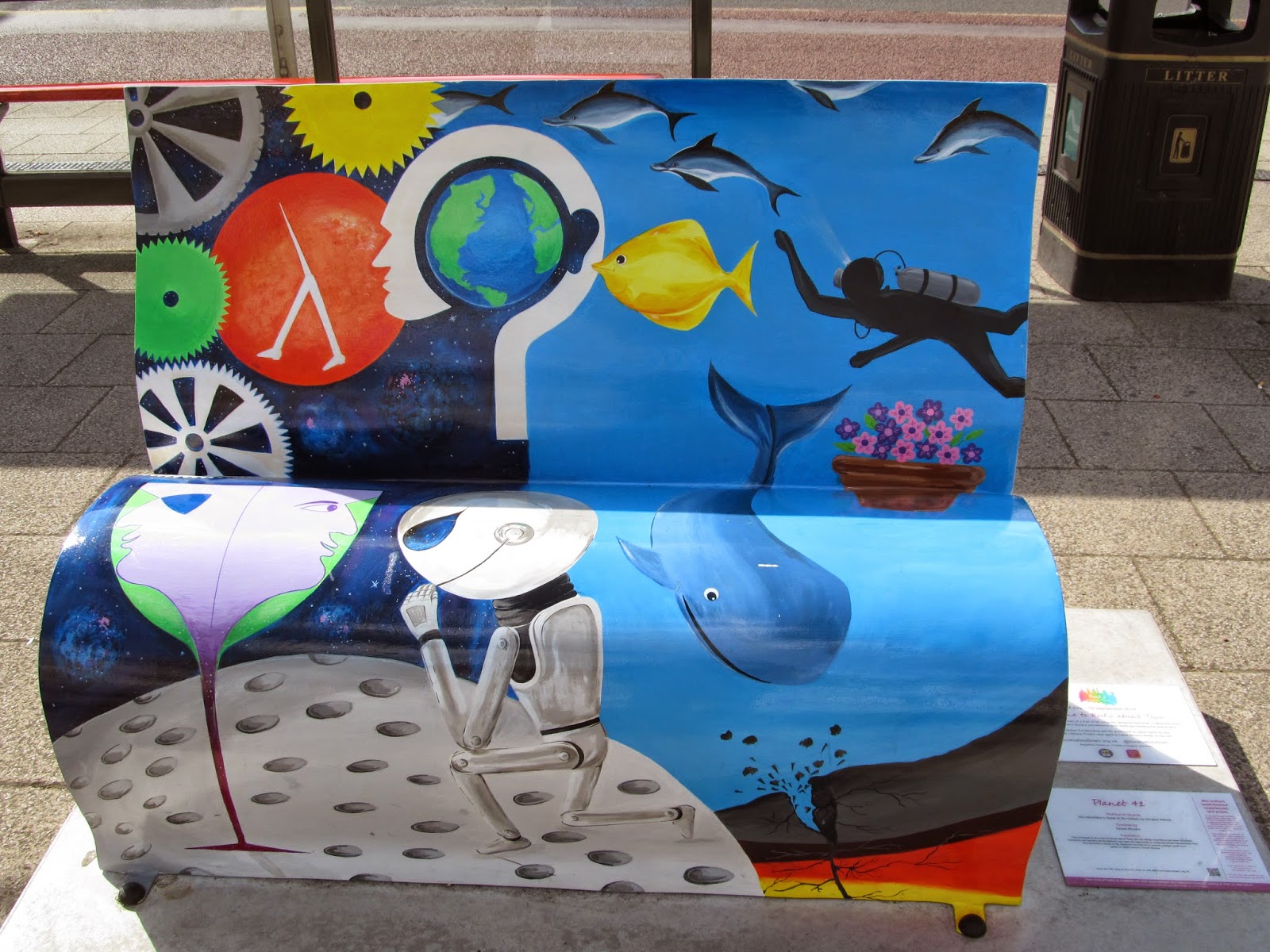 This bench was located near to Greenwich Station and incorporated many elements from the best selling science fiction series written by Douglas Adams.  Please note Marvin the Paranoid Android contemplating life.  The bowl of flowers, fish and other elements also play important roles in the series.  This is the front of the bench and is the close relation of the back of the bench. 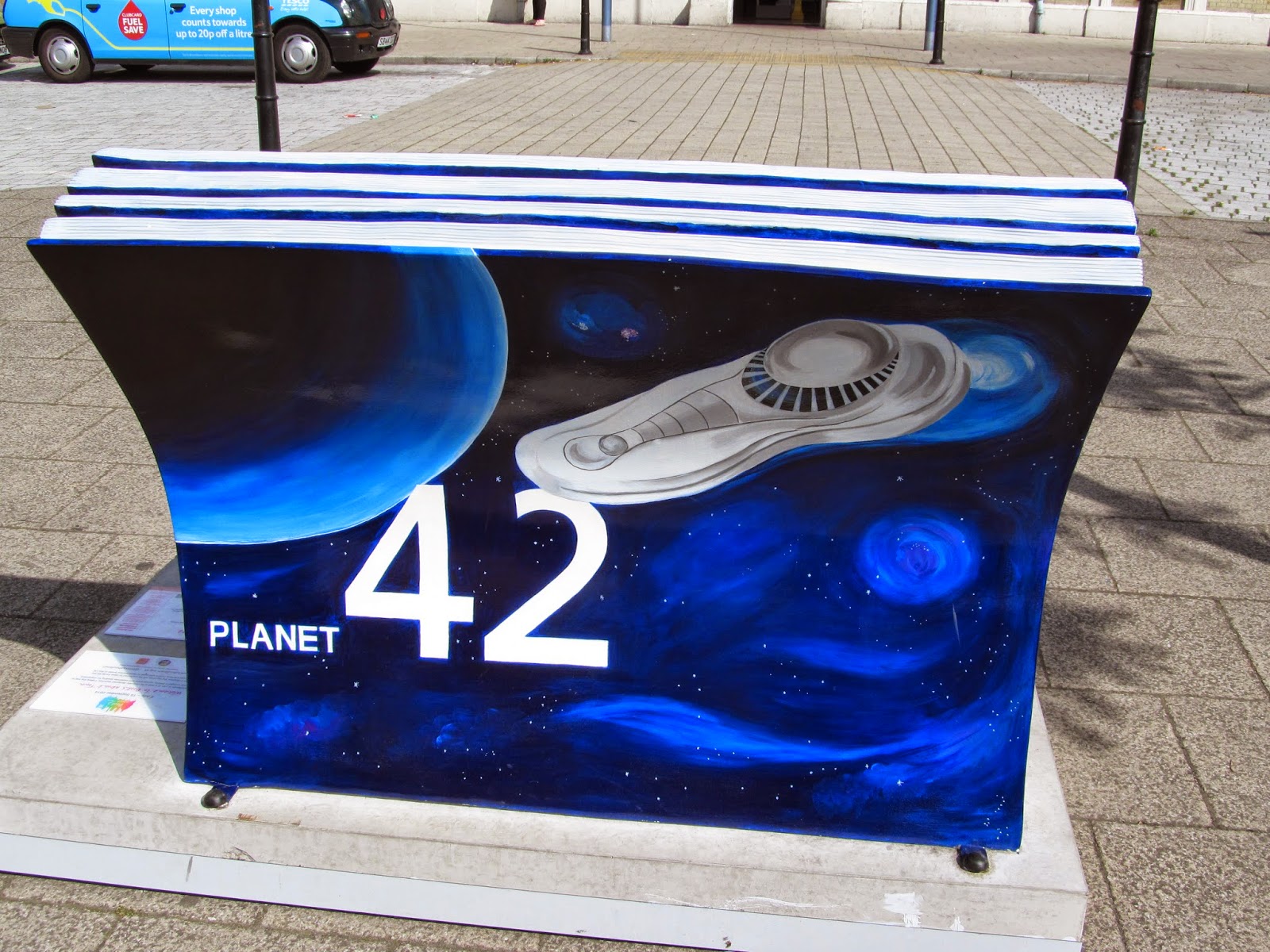 The back of the bench and of course, relevance is placed upon the number '42', which is the meaning of life, in case you had forgotten. 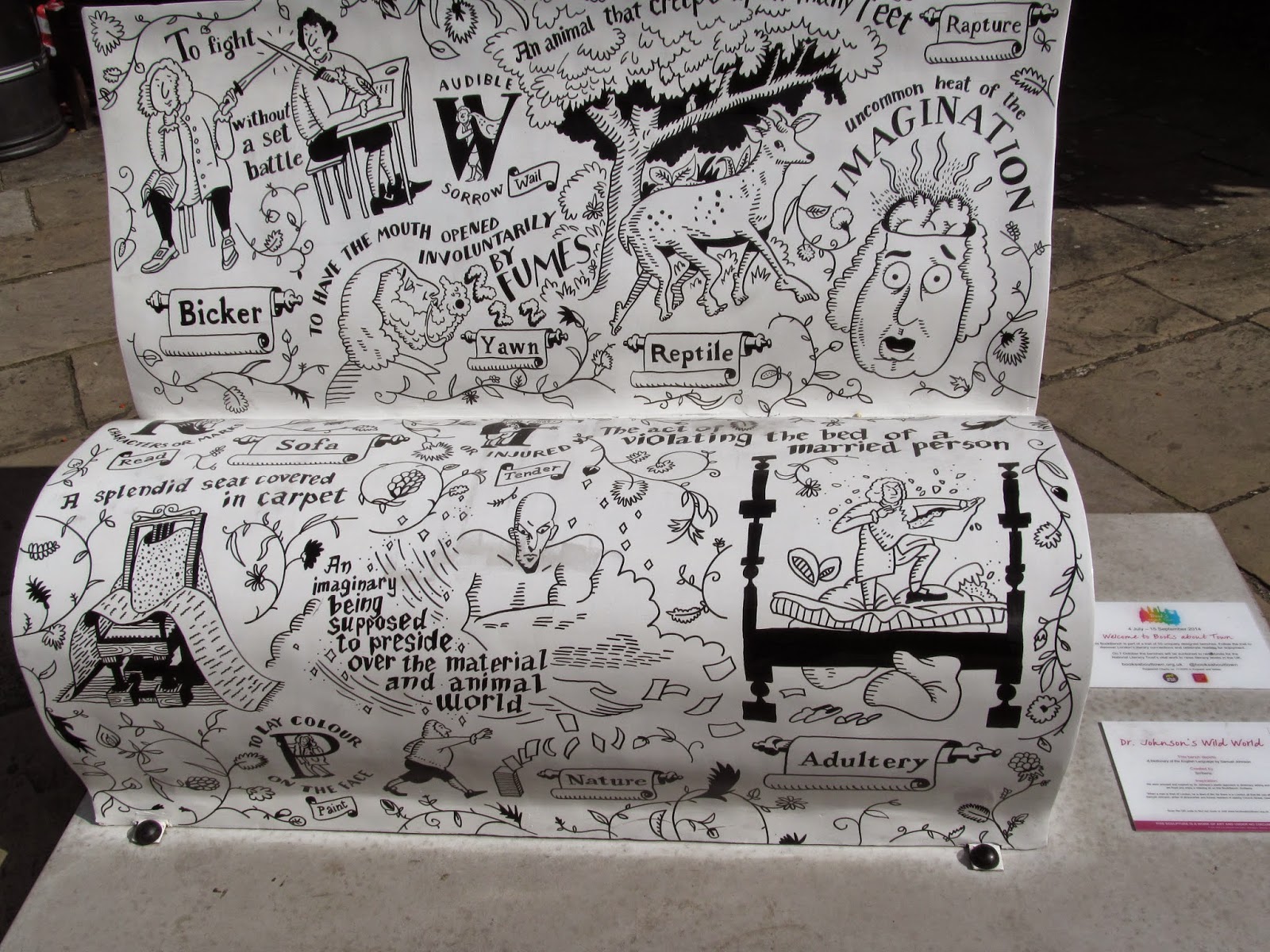 This was one of my favourite benches.  Samuel Johnson created one of the most influential dictionaries of the English language and this bench incorporated a large selection of words with their definitions explained both in words and in images.  For example, 'imagination' is illustrated by an image of a brain on fire and 'adultery' by a bed.  This bench was about a five minute walk from the Fan Museum. 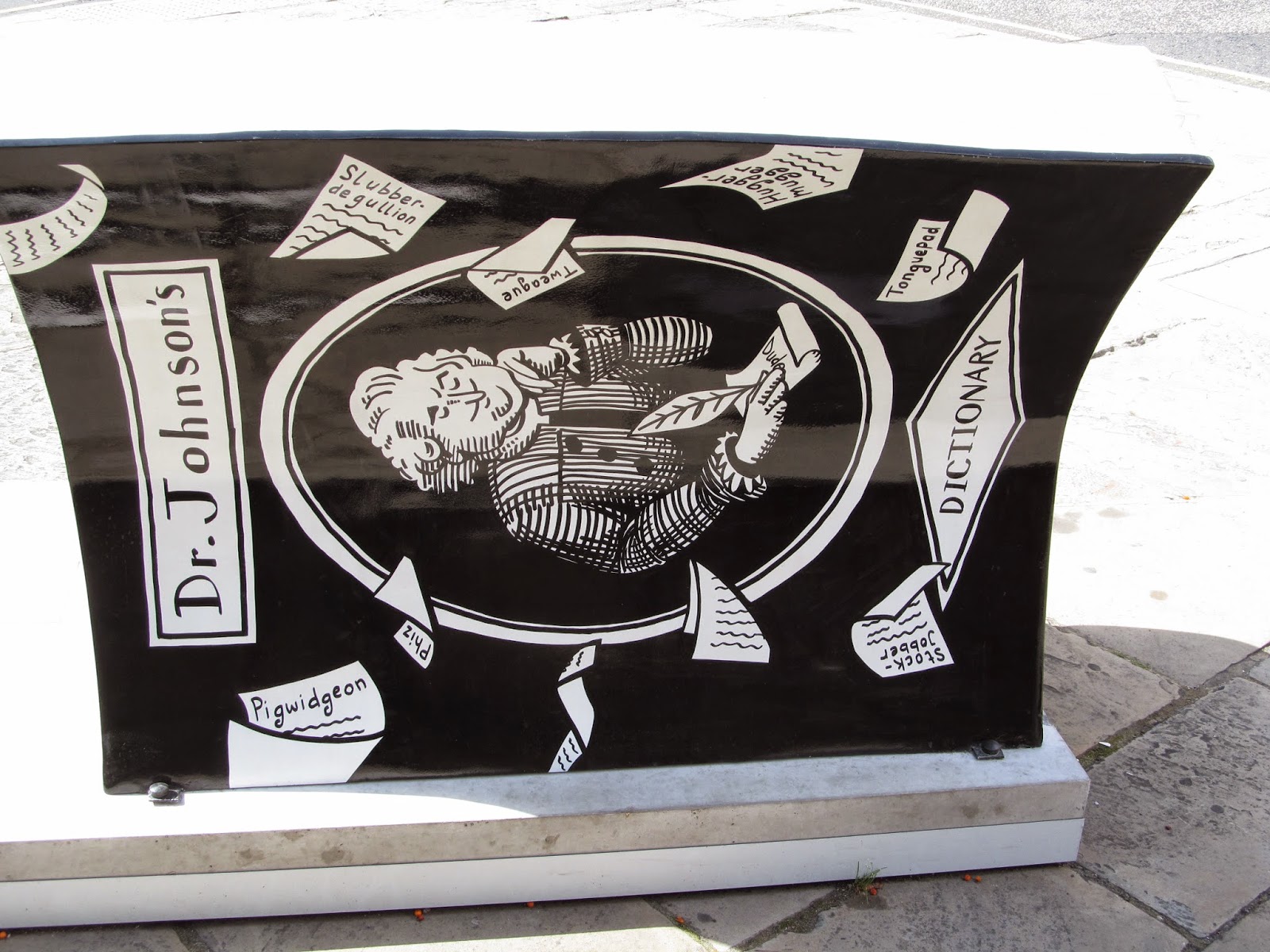 The back of the bench illustrates Dr. Johnson at work on his dictionary. 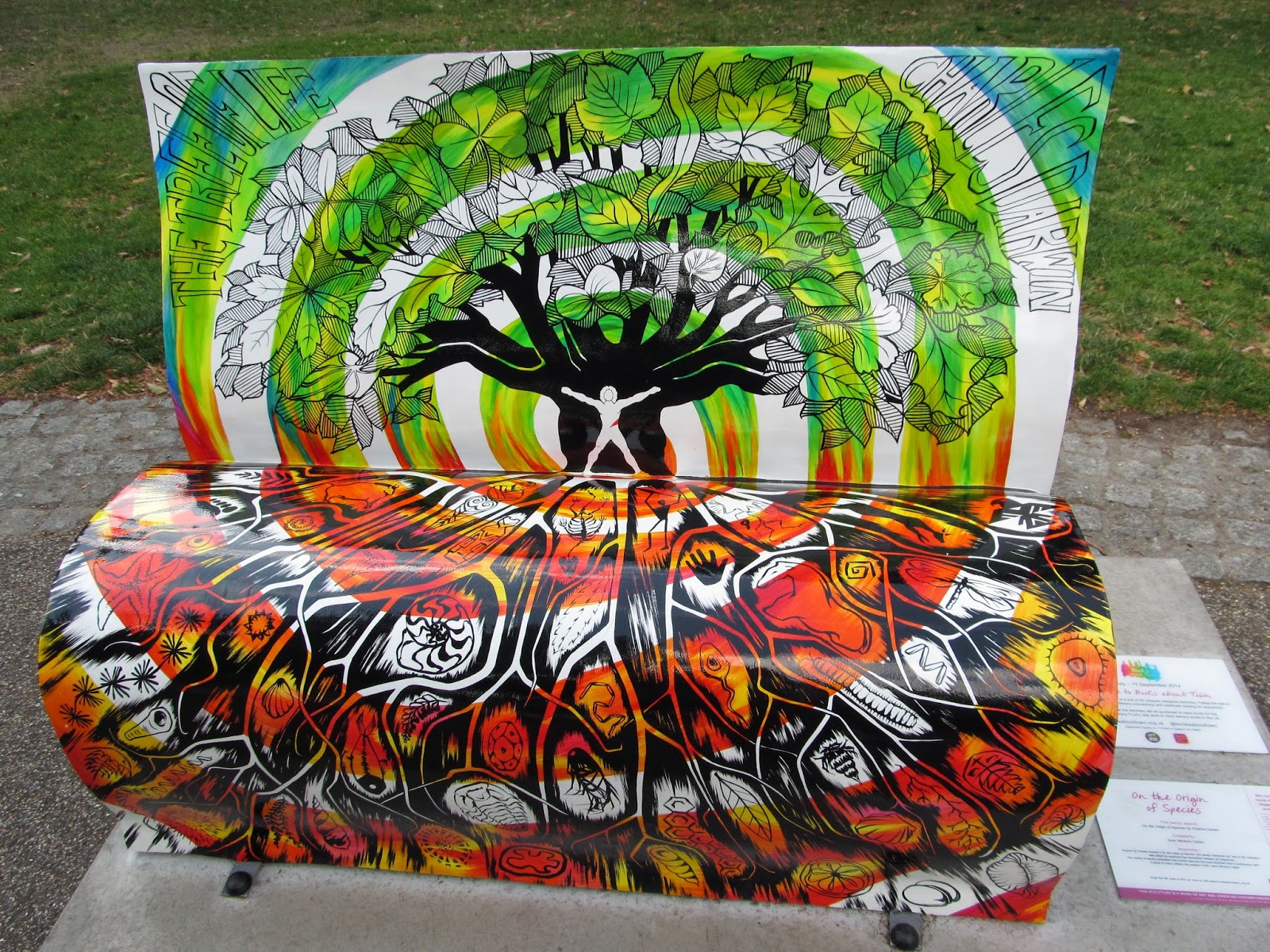 The front of the bench depicts the wonders of nature with the dodgy assumption that everything starts and ends with mankind.  Charles Darwin's evolutionary theories represented by a myriad of linked species.  This bench was in Greenwich Park. 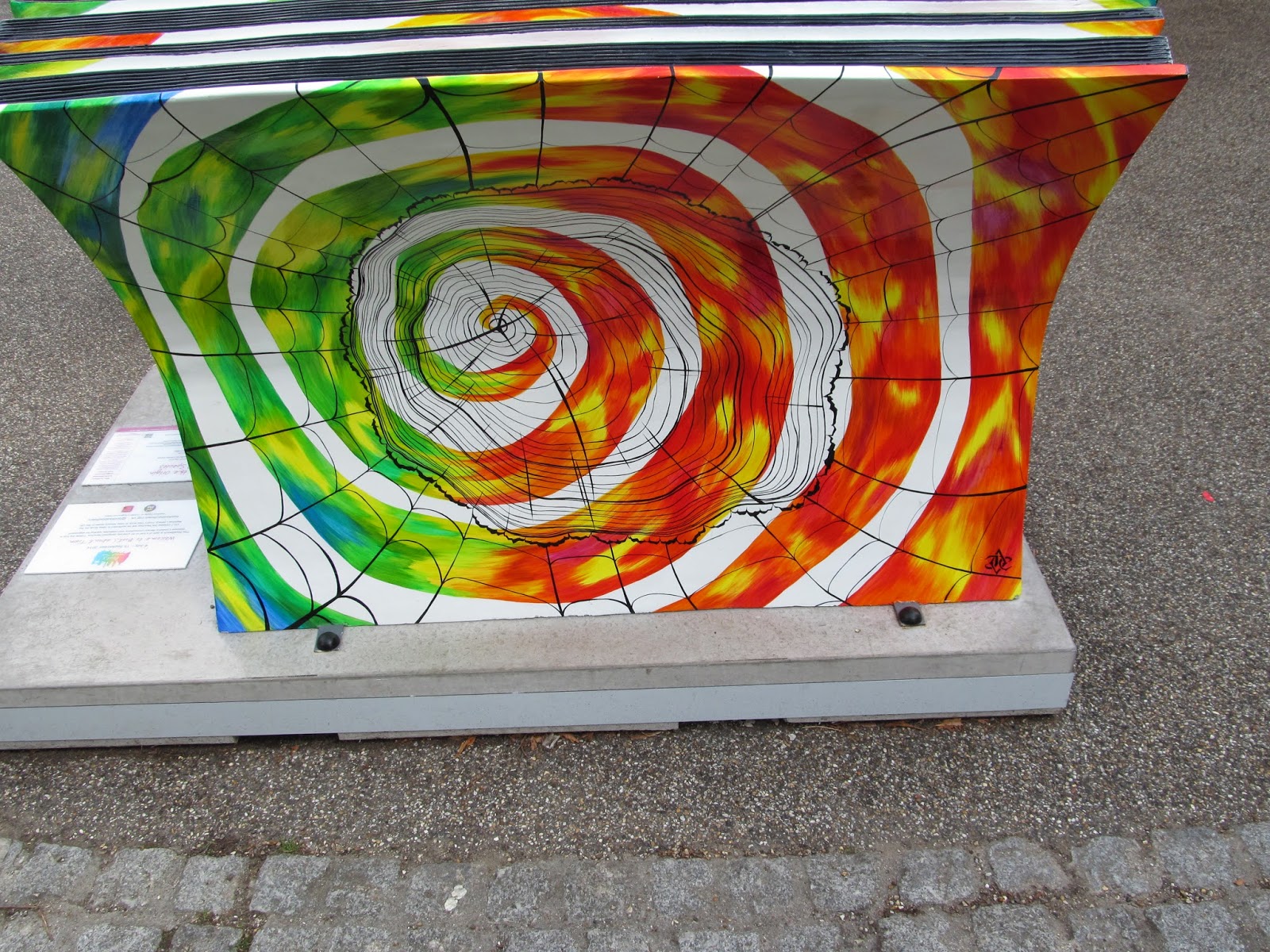 The back of the bench reveals a spiral.  Quite a complex shape.  The spiral shape is a factor within the double helix of DNA. 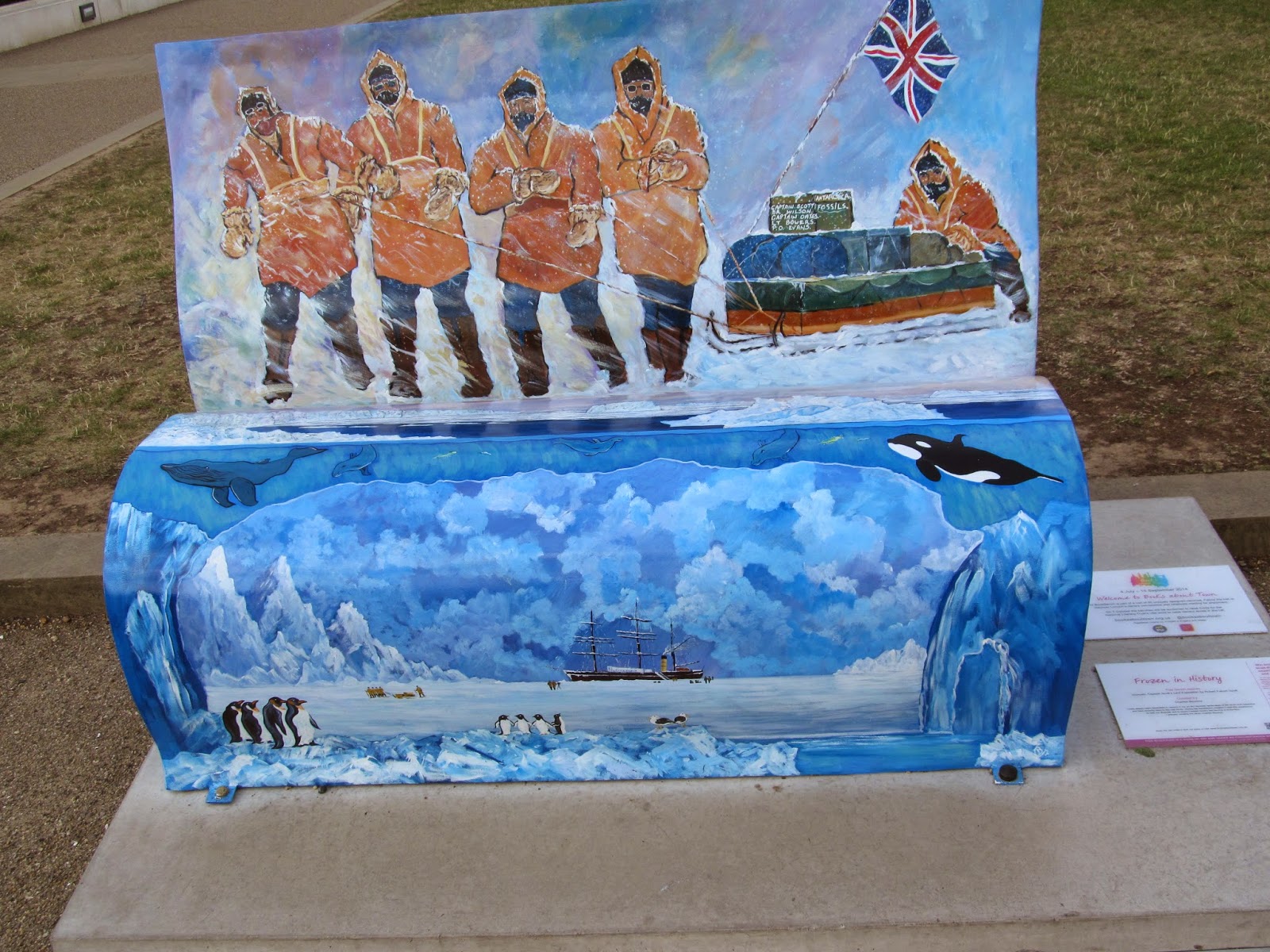 A bench with a very sad story attached to it.  Captain Scott's ill fated expedition to the Antarctic regions.  This bench was located near to the back of the National Maritime Museum.  The front of the bench is decidedly more upbeat than the back as it represents the earlier stages of the trip. 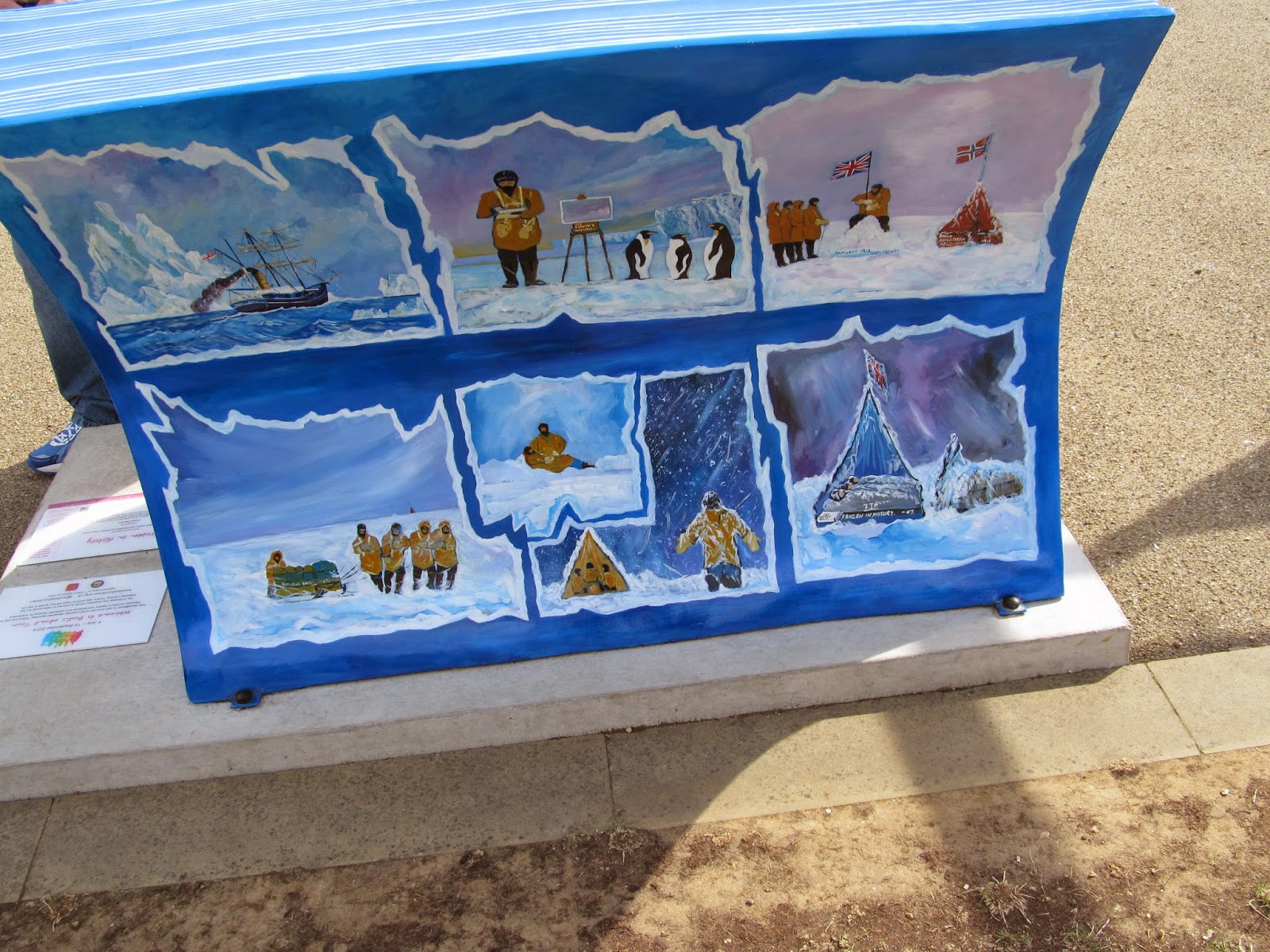 The back of the bench represents the end of the expedition.  The starvation and deaths caused by terrible weather conditions, preventing Captain Scott and his group from walking back to their depot, which was eleven miles away.  The six panels on the back of the bench reveal what happened. 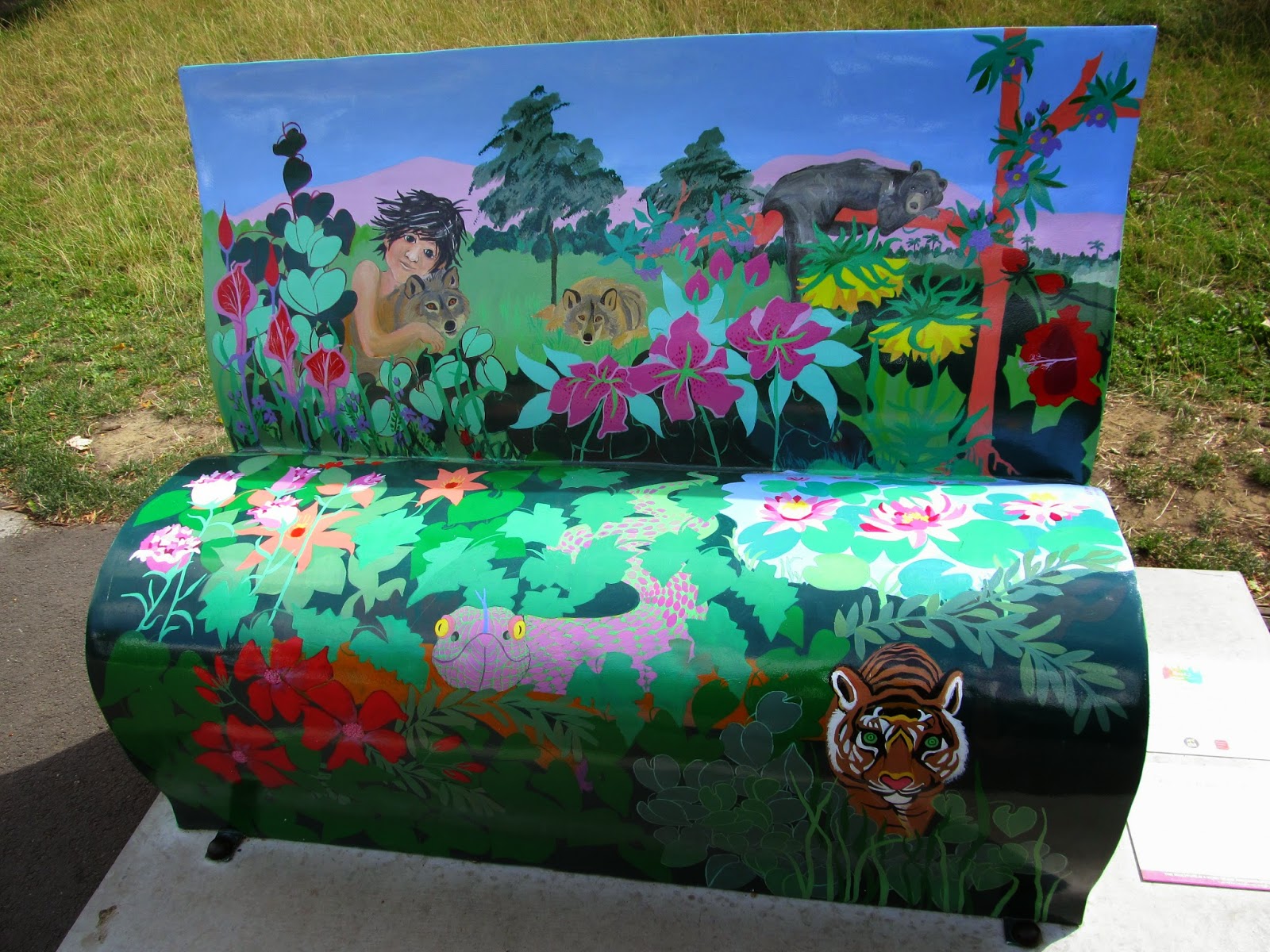 A very colourful bench featuring many of the characters from Kipling's 'The Jungle Book'.  This was also in Greenwich Park. 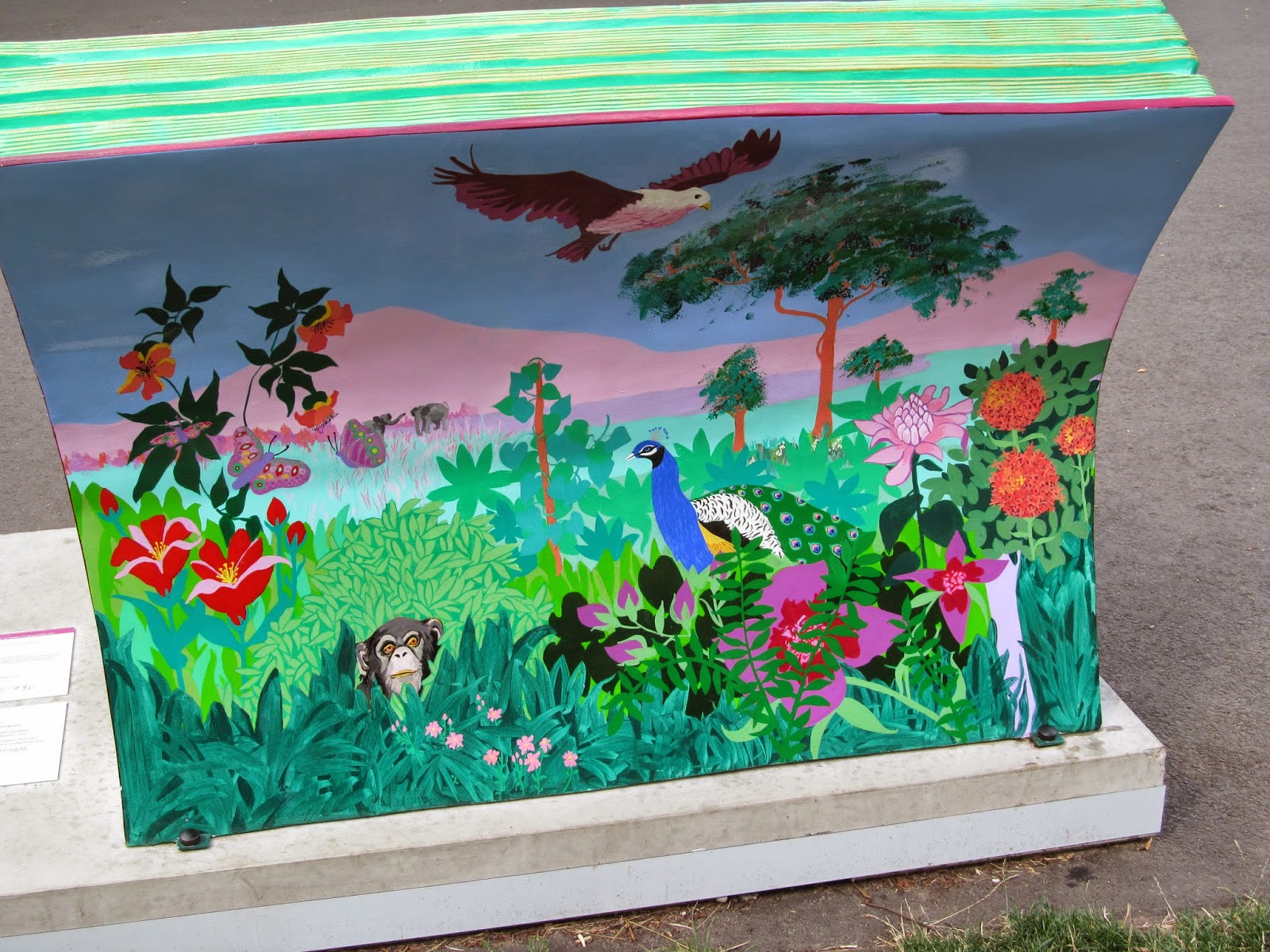 The back of the bench representing the vast array of species that hang out in the jungle. 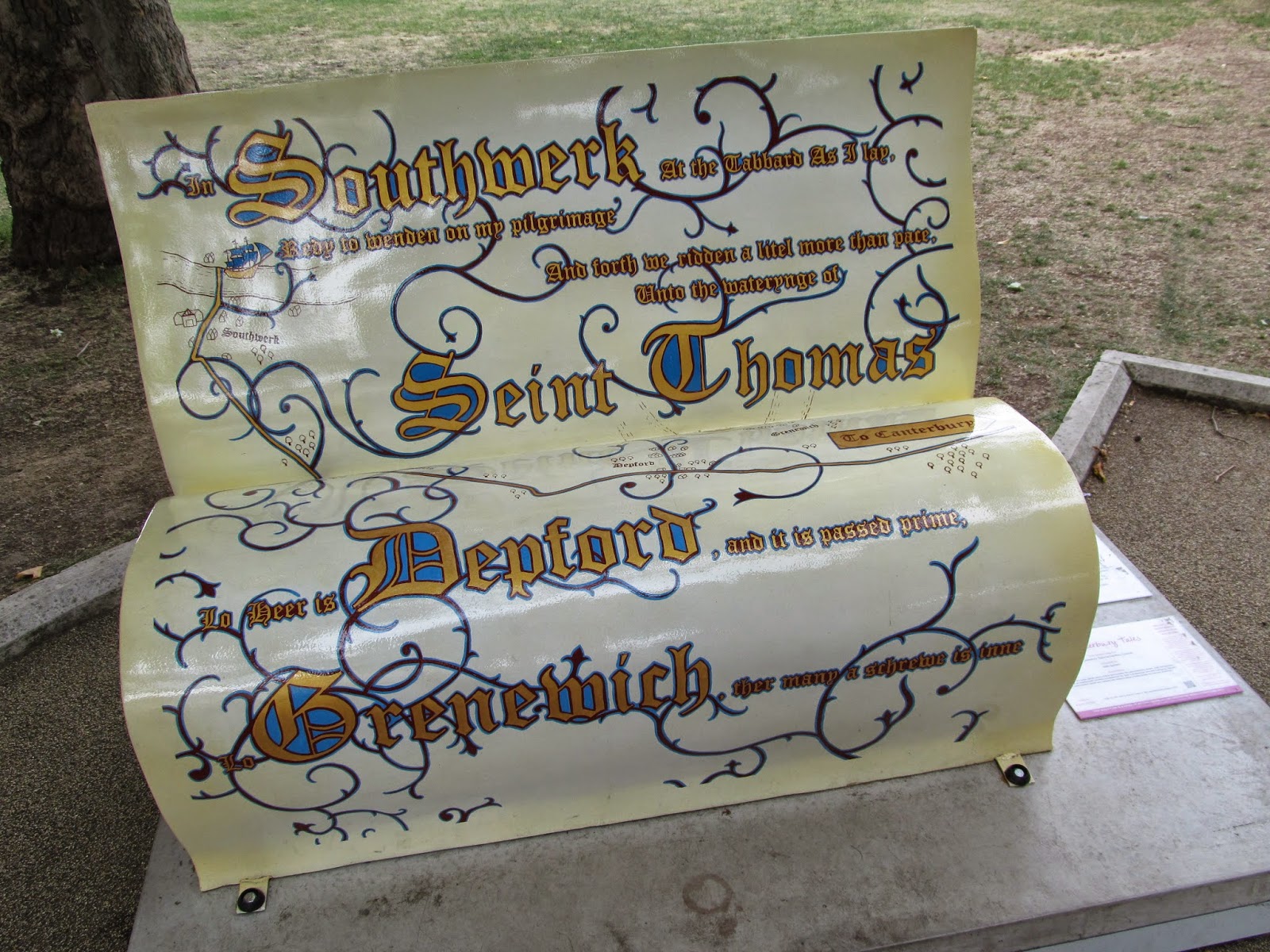 This bench was located near(ish) to the Royal Naval College.  Note the old English spellings of the place names.  Not the most exciting of the benches, although I enjoyed the typography. 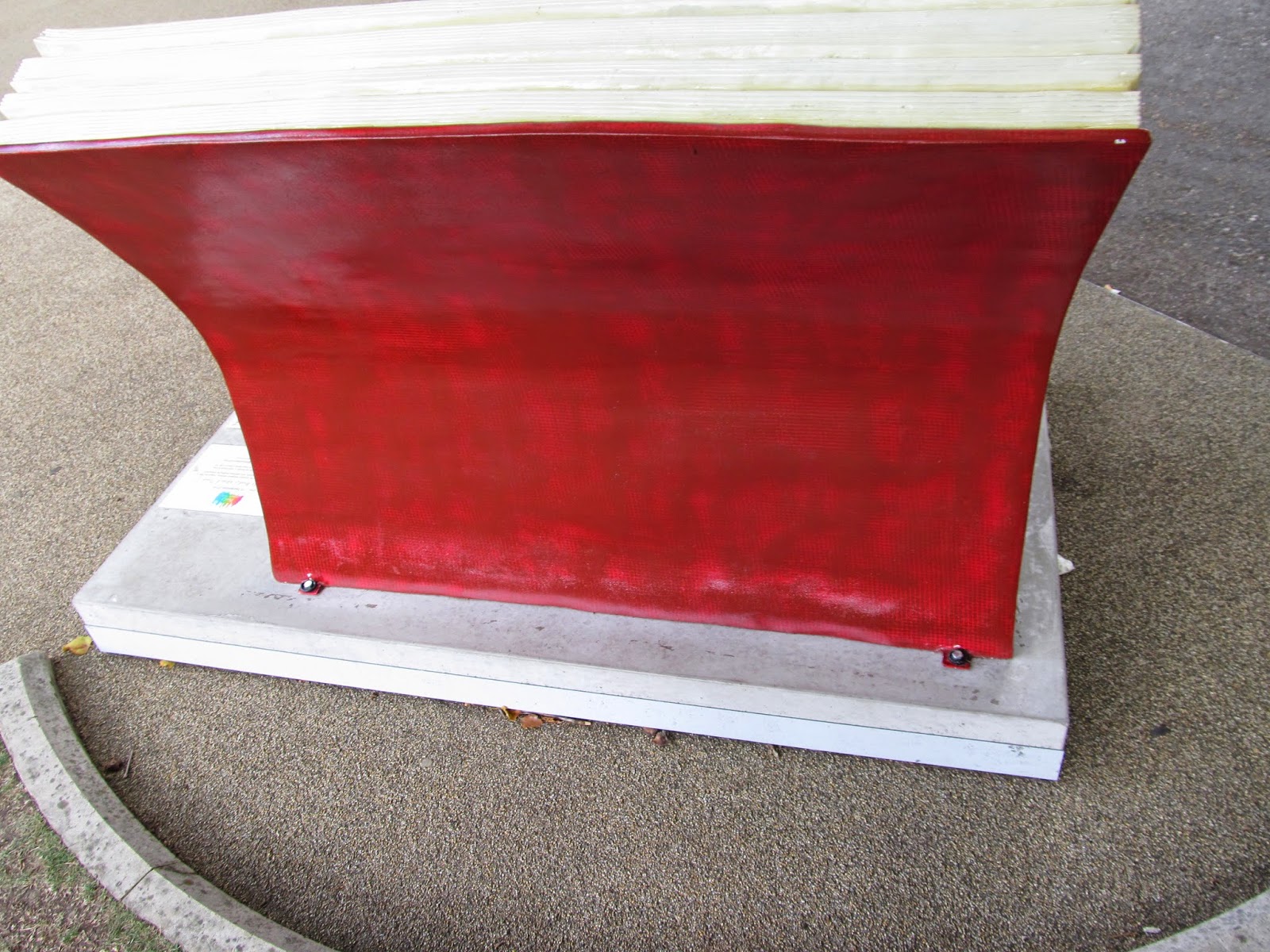 Yes, the back of the bench.  If in doubt or if you can't think what to put on the back of  a Chaucer inspired bench, just paint it red.  Having said that, it does give the bench a sense of completeness. 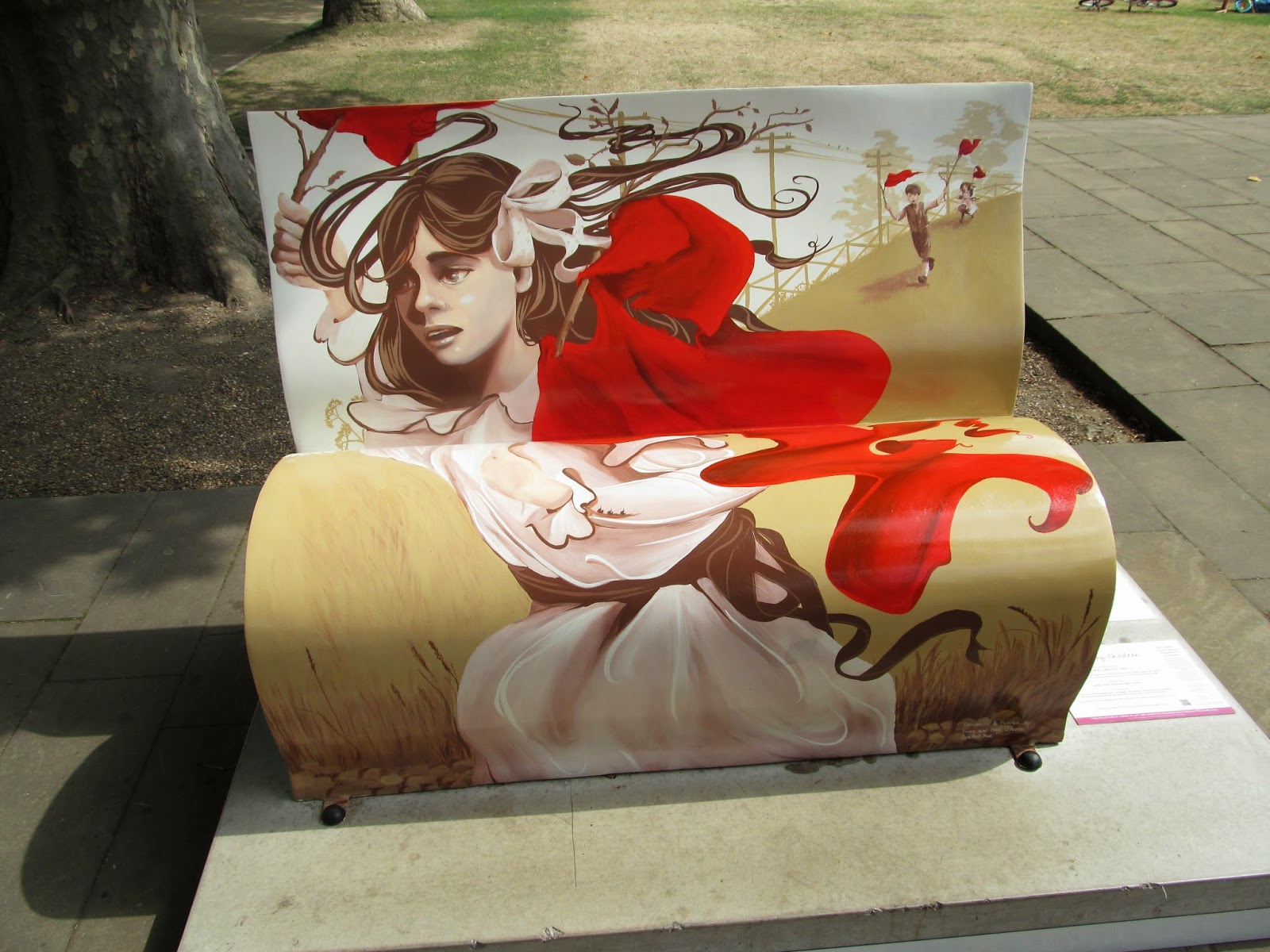 The front of the bench inspired by 'The Railway Children' by Edith Nesbit.  The iconic image of the daughter running to meet her father as he returns to the family after his mysterious disappearance.  This bench was located near to the River Thames and the Royal Naval College. 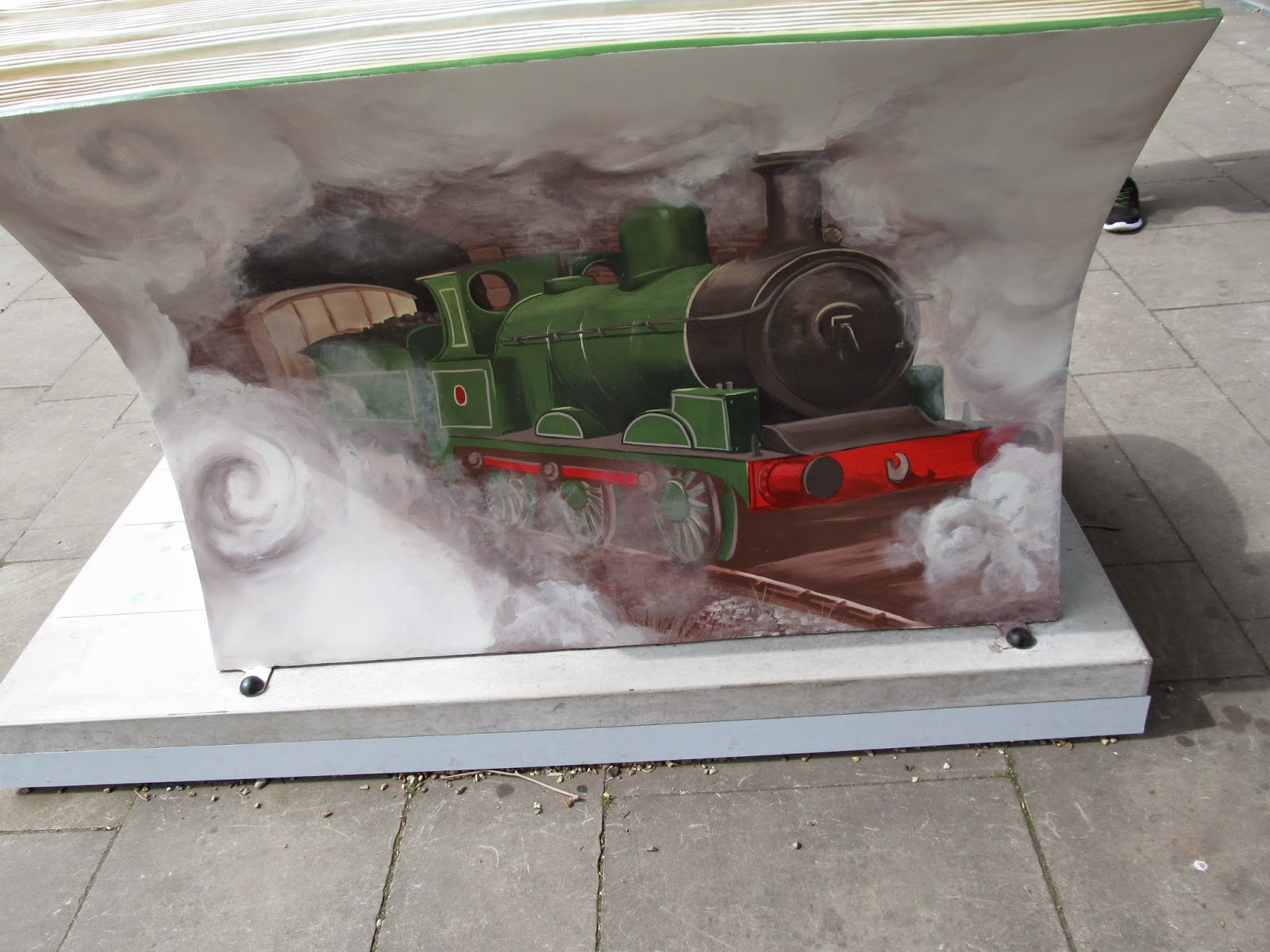 The back of the bench showing the train bringing the girl's father home. 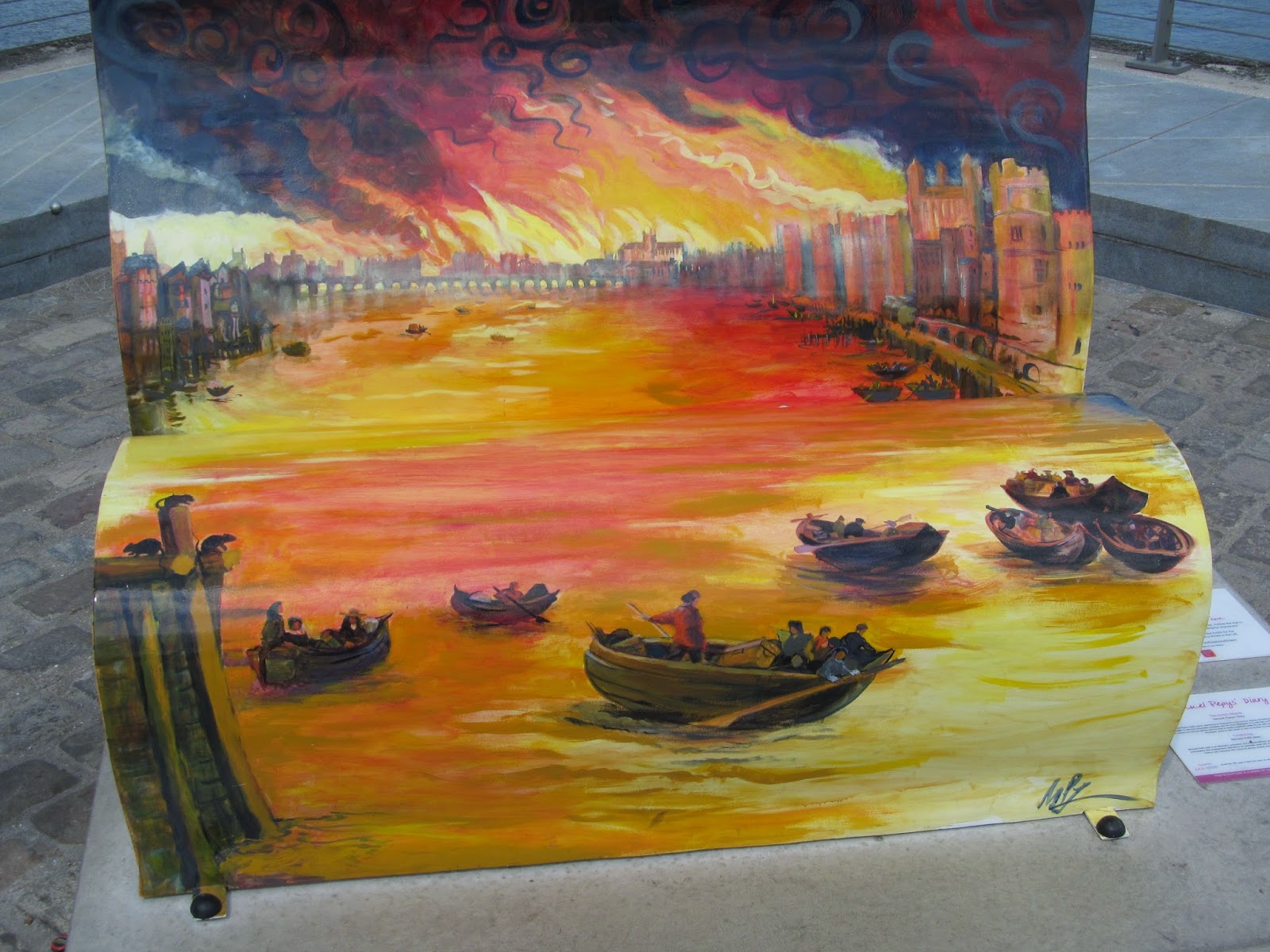 The front of the bench representing Pepys' diary and the Great Fire of London.  It's still amazing to think that at one point, a number of Londoners lived on a bridge.  This was near to the River Thames and the Royal Naval College. 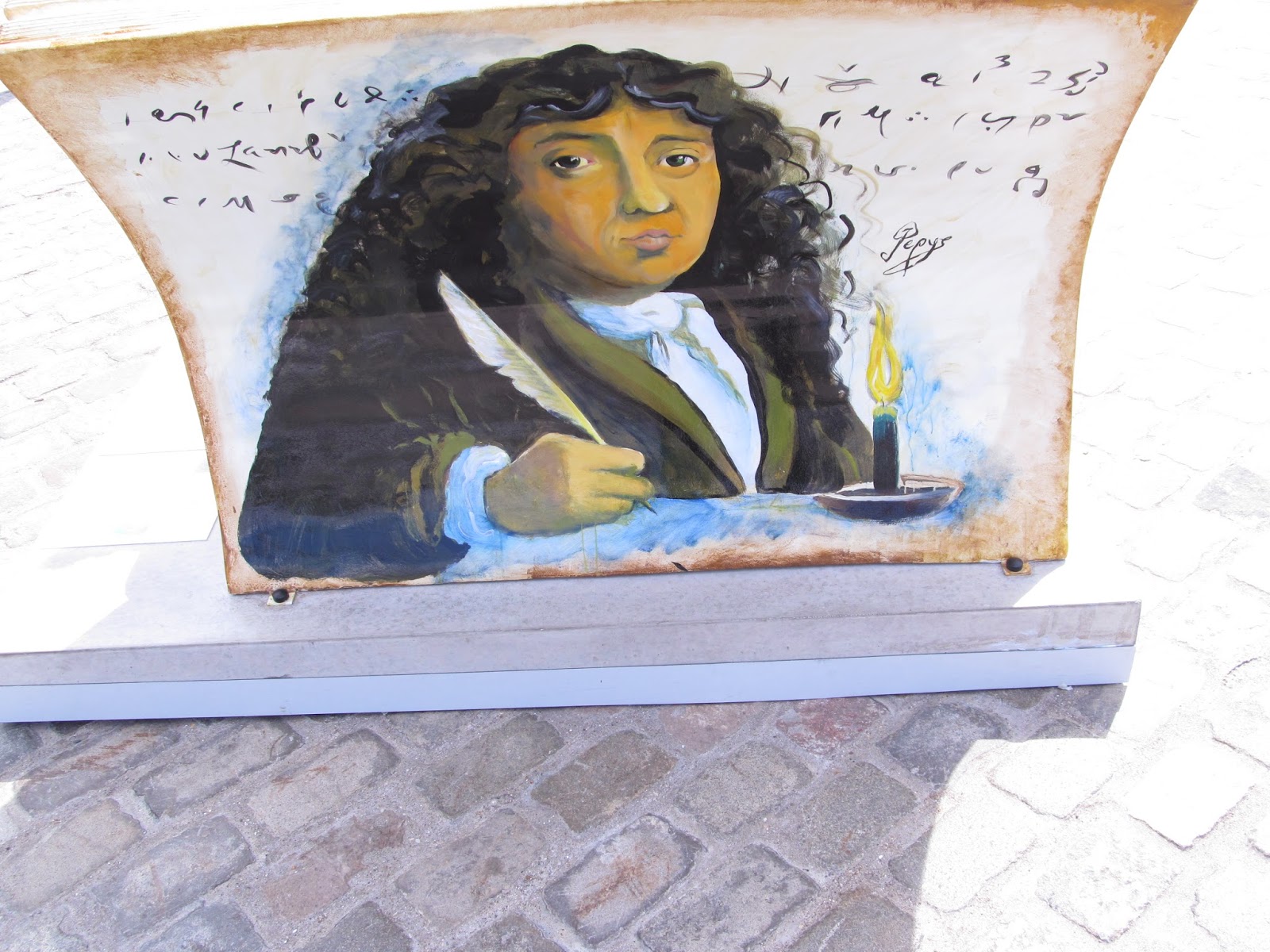 The back of the bench with an illustration of Pepys writing his diary. 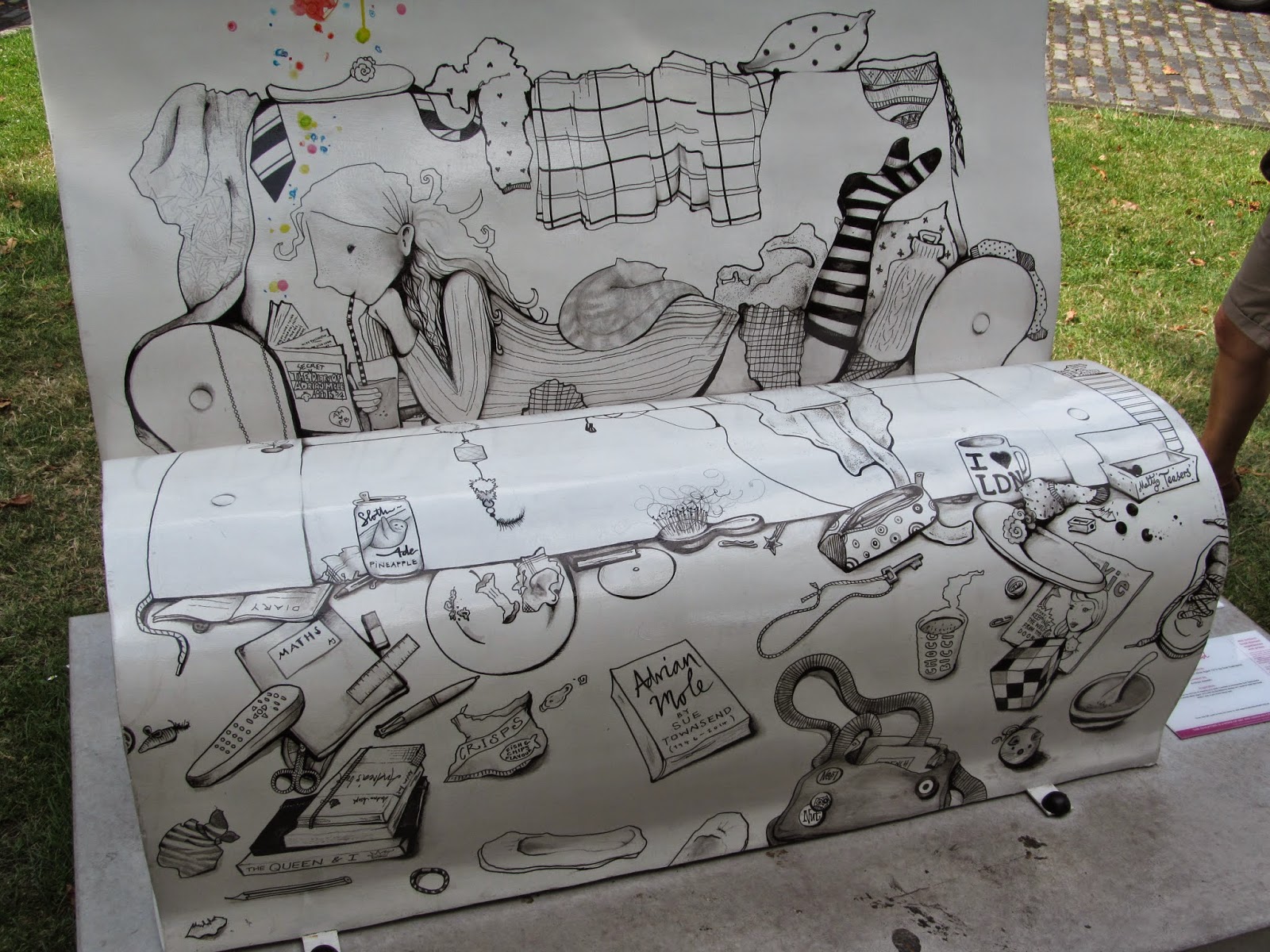 The front of the bench depicting a girl laying on a sofa with the detritus of her age.  The most potent image is the copy of 'Adrian Mole' which inspired the bench 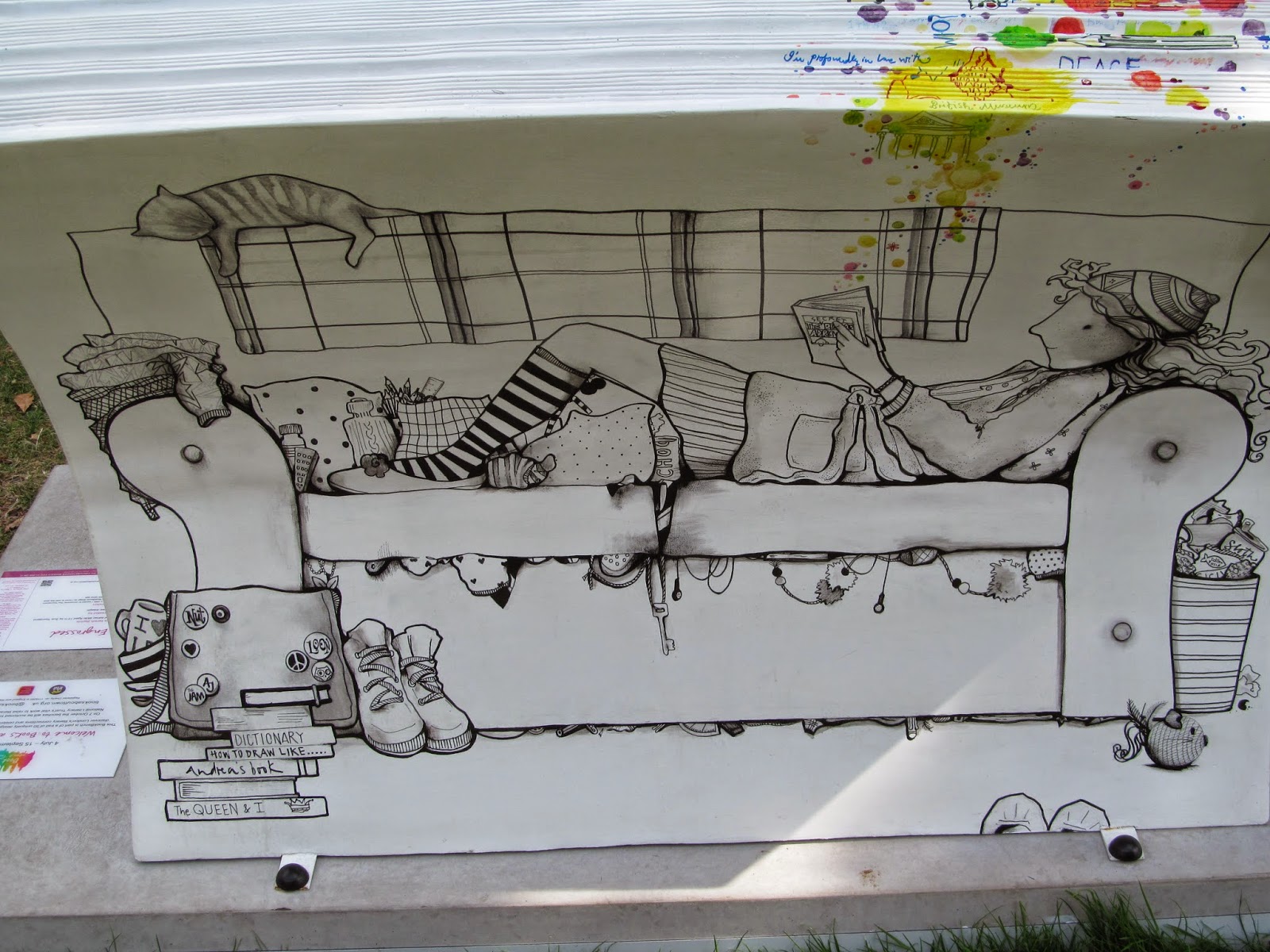 The back of the bench representing a girl reading.  I guess the girl may have been the artist remembering the past.  I can't remember exactly where this was, although it wasn't near the River Thames or the Royal Naval College.

The second part of the hunt for the Book Benches was slightly unsatisfactory as I failed to locate three benches in Greenwich Park, so I vowed to search for them at a later date.